In 2017 live tournament poker reached new highs with bigger tournaments and larger prize pools becoming the new norm. While it is difficult to say exactly how much money was handed over in prize money, we can take a look back of some of the biggest winners in the past 12 months. 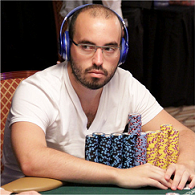 s certainly Kenney’s most successful year yet. In total, he pulled in over $8.5 million topping WSOP Main Event champ Scott Blumstein. Kenney got the year off to a good start with a $1.5 Million haul at the PokerStars Championship Bahamas. A few days later he won the No-Limit Hold’em Shot Clock followed by another $25,000 at and $300,000 in Vegas. In Monte Carlo, Kenney picked up his biggest win with the €100,000 Super High Roller paying out €1,784,500.

Blumstein won the WSOP $10,000 Main Event. For his efforts, he picked up a cool $8.1 million for being the last man standing from over 7221 entries. It goes without saying that this was his largest single haul. Blumstein competed in a few smaller tournaments which may just have been a warmup to the main event.

While there were plenty of German players picking up big wins, Vogelsang was the most profitable of them all. Beating out a high-quality field of 55 players, Vogelsang won the Aria Super High Roller Bowl and pulled in $6 million for his efforts. He also finished sixth in the WSOP Europe adding another €606,694 to his winnings. He also competed in the $25,000 High Roller at Aria where he won just over a quarter of a million dollars.

Hot on the heels of Vogelsang, Sontheimer found his lucky streak in May 2017 when he finished runner up to Christian Christner in the $100,000 Aria Super High Roller event. In July he added another €430,000 when he competed in the Poker EM 2017 festival in Austria. In September, Sontheimer cashed in big at the Aria Casinos Poker Masters High Roller series. Of the five events, Sonteheimer finished first in two with another fourth place and fifth place finish to secure the purple jacket.

Holz is no stranger to the winners board and he too had a profitable year. Although he officially announced his retirement in 2016, Holz was still in the thick of the action. He won several tournaments over the past 12 months including the HK$250,000 No-Limit Hold’em in Montenegro. He then went on to win two $50,000 Super High Roller with a first and second place in two consecutive days, not bad for a retiree.