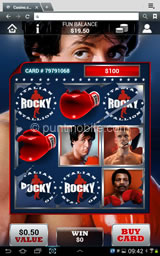 Instant win games can be just the ticket when looking for a fast reward; they offer a quick buzz of exhilaration as you wait to discover how much you’ve won, with cash prizes paying out potentially tens of thousands of pounds to lucky winners.

Mobile Scratch cards are for many people the ultimate choice when gaming on a Casino App as they give you the chance to win the big bucks wherever you are, and without the mess and bother of having to scratch the foil off of a real Scratch card. The basic excitement of uncovering each symbols remains, however, especially thanks to the tactile element of touchscreen gaming.

Here’s a list of the top mobile Scratch cards on the market right now, all of which are available at one of our top recommended mobile Casinos, Casino.com.

Based on the blockbuster cult-classic Rocky, the sensational Scratch card features fictional boxer Rocky Balboa battling against all of his old opponents, including Apollo Creed, Clubber Lang and Ivan Drago. For every scratch you’ll be rewarded with a sequence from the actual movie itself, so this is a great game for Sylvester Stallone fans.

Part of one of the most successful film franchises of all time, not to mention the popular comic books, Iron Man is the hero we all long to be. He’s hard but human, hostile but hilarious; and he has a seriously cool suit!

The scratch card features all of the best characters from the 2010 hit Iron Man 2, including Whiplash, War Machine, Black Widow and, of course, Iron man himself. Marvel fans will go crazy for this Scratch card.

The unforgettable face of the Pink Panther makes for a fantastic Scratch card, bringing back memories of the old show and the hours of entertainment it provided. Now that the Pink Panther has his very own Scratch card he’s uncovering treasures again, but this time you’ll be the one to benefit. Simply match three identical images from the nine cells – featuring pictures of all the most memorable characters – and you could win one of the top Jackpots.

Inspired by the Mobster scene of the 1920s, Chicago Streets Scratch Card focuses on prohibition era Chicago and the glamorous gangsters and girls that were hanging around at the time. It’s a fun theme for a simple Scratch card, with symbols including cars and weapons from the era.

Unlike many other Scratch cards, this cute and cuddly game is one that’s aimed for the girls. With symbols include lollipops, balloons, angels, gifts and teddy bears, players must simply match three angels in a row to receive rewards that are surely heaven-sent.

It may be too sugary sweet for many players, but it makes a refreshing change to be playing a game that’s full of happiness and rainbows.

All of the Scratch cards in the list adhere to the following specifications:

To play any or all of these exciting mobile Scratch cards today as well as hundreds more of the best mobile Casino games, visit Casino.com today. If you’re new to the Casino App you’ll be guaranteed a Welcome Bonus on your first deposit worth up to £3,200 so don’t miss out!