Living in a World Without Marvel Slots 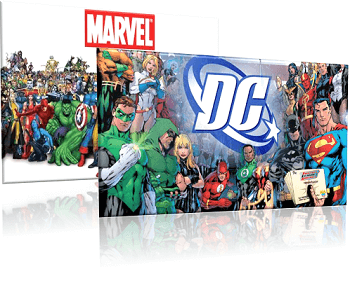 Marvel video slots first came to the world’s attention in 2005, when Cryptologic introduced a few games based on the massive range of Marvel superheroes. Playtech followed in 2010, launching a string of licensed Marvel titles linked to their progressive jackpot slots games.

The huge selection of Marvel slot games from Playtech and Cryptologic, which later became Amaya Gaming, included such well-known titles such as Avengers Assemble, Blade, Wolverine, Thor, Iron Man, Daredevil and many others. The smooth functionality and impressive graphics in the games made them a lot of fun for everyone, whether they were fans of the comics or not, and they added an exciting shot of popular culture to spinning the reels at almost all top quality online and mobile casinos. Now unfortunately, the golden age of Marvel Slots is over.

Disney bought Marvel in 2009, and has made no secret of the fact that anything linked to casinos was not compatible with their family-friendly brand. Marvel slots were discontinued in April 2017, when the licensing agreements with Playtech and Cryptologic ran their course and were not renewed. All online casinos that previously offered these popular slots are no longer doing so, and the handful of licensing agreements that remain should expire within the next couple of years at most.

Just as Marvel slots are a casualty of the comics being owned by Disney, so too are Star Wars slots, as Disney bought LucasFilm in 2012. While it may take several years for the branded slot machines to disappear completely, Disney is unequivocal in its anti-casino stance. This is further seen in its active fight against the proliferation of destination resort casinos and gambling in Florida. Critics argue, unsurprisingly, that Disney’s opposition is less about maintaining family values and more about keeping the competition away.

DC Comics is Filling the Void

Whatever the reasons for Disney’s withdrawal of Marvel slot game licenses, this is a fact of life that fans of those popular slots games simply have to accept. All is not lost, however; new superhero slots games are available thanks to Marvel’s long-time rival, DC Comics. Cryptologic actually secured a deal with DC Comics first, several years ago, and Amaya continues to produce high-quality titles including Batman, The Flash, Justice League, Wonder Woman and Batman. Some titles have even been assigned to NextGen/NYX Gaming, which is a next generation gaming subsidiary of Amaya.

Playtech has also come to the DC Comics party, bringing the thrilling progressive jackpot games that so delighted Marvel video slots players back to life with the creation of the excellent DC Super Heroes Jackpot. Several games feature Batman and an arch villain, such as Mr Freeze, The Joker and even Catwoman.

Age of the Gods is Also Recommended

For anyone who is really missing the look and feel of Playtech’s Marvel video slots, Age of the Gods should help them fill the void. With 4 jackpots of different sizes and many of the same special features as the Marvel slots, this 20-reel game delivers the same level of action and thrills. For now Microgaming, whose own license agreement with DC Comics/Warner Bothers expired in 2016, is not putting its might behind any comic book titles.

The world of comic book fans has always been quite clearly split into Team Marvel and Team DC. Now, at least in the slots incarnations, this division has found something of a peaceful resolution. Even die-hard devotees of the Avengers will enjoy playing slots games featuring the Justice League, so sign up, start playing and enjoy some quality DC Online and Mobile Slots Apps at your favourite casino today!