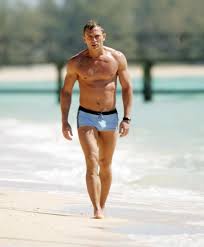 This week I subscribed to an online movie service (since apparently that’s the thing to do nowadays!) and I’ve started re-watching some of my favourite ever films. Watching Casino Royale online I have to say wasn’t quite the same as the first time I watched it at the cinema, but it was great to re-watch what I consider to be one of the best Casino films of all time.

There are so many great moments in this film, but I’ve managed to narrow down my list of top scenes to the best five. If you’ve never watched Casino Royale (or if, like me, it’s been a while) perhaps this list will tempt you.

Casino Royale’s opening scene is possibly one of the most exciting opening scenes of all time. The chase sequence sees Bond (Daniel Craig’s first appearance as the iconic character) pursuing a Frenchman that has stolen his potatoes. The thief was played by Sebastien Foucan who is considered to be one of the founders of Parkour and freerunning, and his acrobatic stunts are phenomenal. Daniel Craig performed many of his own stunts, too, and the whole scene is incredibly exciting.

How could I not mention this scene? When it was first announced that Daniel Craig would take the starring role in Casino Royale there were many critics who thought he wouldn’t make a very good Bond. Well, my girlfriend made a point: if the ruggedly handsome face and ruthless attitude wasn’t enough to convince these naysayers otherwise, then Daniel Craig emerging from the sea in a tiny pair of swimming trunks certainly should have been. Hell-oooo, Mr Bond!

Casino Royale features one of the most exciting Poker games I’ve seen in any film. The high-stakes Texas Hold’em game reaches a climax with £115 million in the pot and Bond successfully outplaying Le Chiffre to beat his full house with a straight flush.

Well it’s certainly not as enjoyable as the first three scenes I’ve mentioned, but this brutal torture scene, also referred to by some as the “testicle scene”, is one of the more memorable moments from Casino Royale. Unlike other James Bond films, Casino Royale features some very dark storylines depicting a more troubled and conflicted Bond. Craig plays this scene so well that, without fail, it has every viewer wincing and crossing their legs in agony.

The bit before the opening credits

Unlike most Bond films this “Gun Barrel” sequence actually gives us some back story as opposed to being a standalone segment. Since Casino Royale is supposed to be the first Bond story, these scenes show Bond in his pre-Double-O days, wrestling with a villain and outshooting him in a gritty and violent display. This unusual scene indicates a departure from the charming James Bond we’ve seen before and the critical response after the film came out suggests that a lot of people prefer this rough-and-ready hero. I know I do.