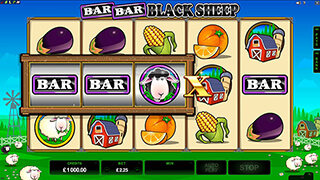 There’s lots to be won too! Land 2 Bar symbols and 1 Black Sheep symbol in either the base game or the free spins game and players could achieve up to 999x their line bet. Up to 95 000 coins are available in total and this makes Bar Bar Black Sheep a highly fun and lucrative casino game.

There’s no discounting the revenue generated by mobile apps. While mobile casino apps are turning out to be a billion dollar industry on their own, the general app economy looks set to escalate with an estimated economy of $101 billion estimated by 2020.

Growth will essentially be driven by two things: an increase in the usage of apps and a more widespread use of smartphones on a global scale. In 2015 games were responsible for 85% of app market revenue, or to put in numbers, $34.8 billion. It is predicted that 2016 will see this number grow to $41.5 billion and reach $74.6 billion by 2020.

However, it’s not just the gaming market that will see such immense growth. Due to changing trends and more businesses taking their products and services into the mobile market, sectors like government agencies, retail, banking and ridesharing will see a tremendous spike in terms of generating not just market value, but actual revenue also.

Predictions are strong for 2016, with the global mobile app market expected to surge by 24% and attain revenue in the vicinity of $50+ billion. Come 2020, this number will surpass the $101 billion mark on a global scale. In terms of markets, Japan, USA and China account for the most revenue for overall app use and growth. Mobile casino app markets on the other hand belong to regions like Australia, Canada and, as of late, New Zealand. Regions expected to see growth due to their potential as fast-growing markets are Indonesia, India, Mexico and Argentina – the latter two have also seen mobile casino penetration. China, it is predicted, will surpass the US in total app revenue by the middle of 2016. This is a repeat move, as it also surpassed the US in 2015.

Region-specific recessions don’t seem to indicate a decrease in the use of apps, as countries like Brazil and Argentina experienced strong growth in 2015. This is also indicative of the fact that the app market is a global one. Brazil is set to grow by 40% this year, a small number of which will be attributed to mobile casino apps.

From a global perspective, the complete amount of time spent on apps grew by a staggering 63% on Android operated phones between 2014 and 2015. As Android dominates the vast majority of anything outside of Apple’s iOS, this type of growth was to be expected. Thanks to the expansion of platforms like TV’s, wearables (wrist items) and even augmented and virtual reality, app usage is set to see quite a boost for 2016 with overall app store downloads expected to equate $147.3 billion – a growth factor of 33%. That number is set to soar to $284.3 billion in 2020