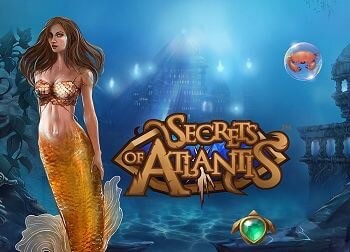 A legendary sunken city and its fabled treasures take pride of place in Secrets of Atlantis, a new online slot from NetEnt. The software developer’s late August release is a video slot with five reels, 40 paylines, and special features to enhance gameplay.

The game’s lush design sees demarcated reels done away with. Instead, the developer has opted for clear reels that offer a view of the underwater background that is interrupted only by the HD reel symbols. Varied animations and a soundtrack with aquatic elements further set the stage for all the action.

The Secrets of Atlantis paylines are fixed which means all lines are active on every single spin. However, the new online slot will allow you to select a coin denomination, and you can also decide on the number of coins to bet per line, with the limit set at 20 coins per line. Sea creatures, other denizens of the deep, and shining jewels make up the symbols on the reels. They include jellyfish, turtles, crabs, pearls in shells, blue, red, and green jewels, and a mermaid.

In keeping with the mystical underwater theme, the mermaid is the Wild symbol. She can substitute for other symbols to help them pay out, and she can stack up on a reel to cover it, turning the whole thing Wild. What’s more, the mermaid is also a Nudge Wild. This means that, if the reels stop spinning and the Wild can be seen partially, the symbol will be nudged either up or down. That way, it will appear in full on the screen to work its magic.

If you manage to land symbols in those positions on a spin, a 3x4 block of symbols will meld into one colossal symbol, which will come with a free spin. The feature can be re-activated if more symbols land in the special reel positions on the free spin.

Secrets of Atlantis can be played on desktop and mobile, and it’s yet another fine release from a brand that’s become renowned for creating top quality casino games.