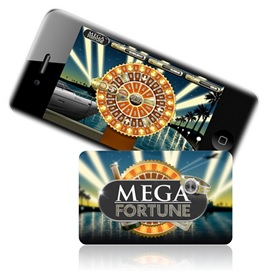 This week NetEnt’s Mega Fortune slots game made another lucky player a millionaire. This progressive jackpot game has paid out several large sums in the past, and this time around the winner was no other than a brand new player, who had never played casino games before.

Within an hour of signing up at Casumo mobile casino, David had scooped a whopping €2,971,469 jackpot on a €1.25 spin, without even realising it. David’s story really is rather exceptional, as not only had he never played slots in his life, he had no idea how Progressive Jackpot games worked, or that Mega Fortune was renowned for its massive payouts.

David says that he was a home with his girlfriend and both of them were a little bored. He recalled that a few weeks back a friend of his had mentioned winning a tidy sum playing mobile casino games, so he decided to check out his options. He stumbled upon Casumo, signed up and made a deposit, cashing in on the 200% first deposit bonus.

David and his girlfriend say they chose Mega Fortune on a whim, with neither of them having heard of the game previously, but finding its bright graphics and French Riviera theme especially appealing. They found the game fun and each took turns pressing the spin button, and when they were down to €9, they agreed to play to zero and give up. As the couple had no idea as to what the Bonus Wheel meant, when they spun it, they simply sat and watched in amazement as the numbers stacked up.

David says he didn’t quite understand what was going on and took a screenshot, sending it to his friend who had mentioned winning previously. His friend first thought he had been playing in demo mode, then realised that in fact, David had just won the €2,971,469 jackpot payout.

When asked what he planned to do with his massive Mega Fortune jackpot win David revealed that his family had recently been through a rough time financially, so he’d help them out first. He also said he doesn’t want his life to change, but would look at buying a bigger house and sharing his winnings with his family, and of course, his girlfriend.

Whilst Casumo has had larger wins in the past, this is the biggest ever in a mobile game. It’s also one that has captured player’s attention, and once again put the spotlight on Progressive Jackpot games.