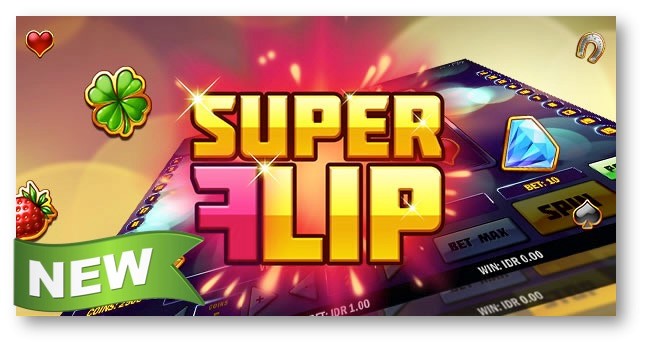 Players can look forwardto some interesting action on the reels of Play’n GO’s new mobile slot, due for release mid-September. Super Flip has an unmistakable classic slot look about it, but that’s where the similarity ends.

The game has five reels and 20 paylines, as well as a host of bonus features such as the Super Flip, Wilds, Scatters, free spins and near-win re-spins.

The slot, which will be available for Android, iOS, and other smartphones and tablets, can also be played on computer for free or for real money.

Familiarise Yourself with Super Flip

Super Flip mobile slot has a design that’s bold yet basic. The layout is clean and uncluttered, the graphics uncomplicated, and the soundtrack entertaining without being obtrusive.

Gold stars, diamonds, clubs, spades, horseshoes, strawberries, and hearts are among the symbols you’ll see on the reels.

The Wild symbol can substitute for other reel symbols and help create combinations that pay. The Super Flip symbol activates the feature that gives the slot its name.

If a spin lands three or more of the symbols, you will be awarded with 15 free spins, and the order of the reels will be reversed, which means the first reel becomes the fifth reel, and vice versa. If three or more Super Flip symbols land on a free spin, you will receive more free spins.

The near-win re-spin feature comes into play when you land matching symbols on the first and second reels that don’t result in payouts. The feature allows you to re-spin the third reel for a chance at landing the matching symbols you need.

If that re-spin of the reel is lucky enough to land those symbols, the combinations formed will pay out.

Play’n GO’s new Super Flip mobile slot also has a Gamble feature that can be accessed whenever you land wins on the reels. Like most Gamble features, it’s a mini game that requires you to first guess the colour of the hole card to double your winnings, and then to guess the suit of the hole card to quadruple your winnings. This adds an extra element of excitement and is ideal for players looking to boost their payout potential.

Super Flip can be accessed at casinos powered by Play’n GO from mid-September and will be compatible with all top brand smartphones and tablets. Players are hoping for another fine release from this respected brand, and if past experience is anything to go by, they won’t be disappointed.