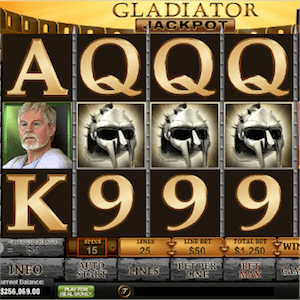 Almost every mobile casino player out there has dreamed of winning one of the unbelievable cash jackpots that are often paid out by the industry’s most popular progressive slots.

Of course, only a lucky few are able to collect these massive prizes – although everyone has the potential to become an instant winner if they play for real money!

Now, just one such player has joined this group of lucky punters with a massive win on Playtech’s Gladiator progressive slot.

The player in question scored a humongous jackpot on the game valued at £1,371,621.61, while he was playing the innovative title on his mobile.

The nature of progressive jackpots mean that no matter how old your account is or how long you have been playing for, they can strike at any time for anyone. This has certainly been demonstrated by the latest win, as the player account of the winner in question was just four days old at the time.

So far, it has been confirmed that the lucky player’s name is David, and that he is the father of two adult sons. The winner revealed more about the huge windfall in a recent interview, noting that he doesn’t have an extravagant plans for the money at the moment. However, he does plan to gift his sons with a hefty sum each to set them up comfortably for life.

The Gladiator slot from Playtech is based on the blockbuster 2000 movie of the same name starring Russell Crow and directed by Ridley Scott. The classic title hit online casinos in 2008 with a massive, continually growing jackpot, and can be played across Playtech’s entire network of casino brands.

How to Win the Gladiator Jackpot

To win the ultimate jackpot, players need to first trigger a jackpot bonus game by landing three or more Gladiator helmet symbols on the game’s centre reels. Once the bonus round is in play, nine different helmets will also be added to the reels at random, each of which will have differing coin values.

The helmets on these reels come in shades of gold, silver and bronze, and all of the coin values given to them will be added together to create a bonus cash payout. However, should a player land nine golden helmets in this round, the maximum Gladiator progressive jackpot will be instantly awarded to them!