How Much Poker Lingo Do You Know? 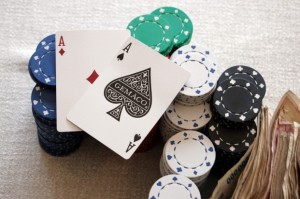 One of the most interesting aspects of the game of poker is the origin of its terminology also known as poker-speak. In the court of public opinion, the jury is still out relative to the origin of the name of the game. Most highly-favored in the realm of word origin is that poker comes from the German word pochen, meaning to knock. In modern casino poker games, players knock or tap on the table to indicate their desire to be dealt another card. In small clubs or in-home games, players may knock to indicate their desire to pass or not participate in the current round.

Many poker terms have very interesting origins, such as the river card or the last card dealt to the community zone. The term river originated in the 1800s when the majority of poker games were played aboard a riverboat. In this venue, successful gaming necessitated gamers keeping at least one eye trained on the game to ensure that an additional card was not sneakingly added to the river. Any gamer caught pulling this trick was tossed overboard into the river.

Although many of the old poker terms have fallen by the wayside, unfortunately, two deemed derogatory are still frequently heard. A player who makes poor/stupid decisions or who appears to be disinterested in the game is still called a donkey. Likewise, many seasoned players still refer to a new or less experienced player as a fish, meaning someone who is easily reeled in or controlled.

The term Dead Man’s Hand, composed of 2 pair aces and eights, is believed to have been the last hand held by Wild Bill Hickok as he was fatally wounded during a poker game. A bluff, the effort to disguise a poor hand as a winning one, was prominently displayed during the 2003 World Series of Poker. Competitor Chris Moneymaker went all-in by wagering all his chips on one hand against his opponent, Sammy Farha. At the conclusion of the game, although he held the winning hand, Farha opted to fold believing Moneymaker held the winning hand.

In most poker dictionaries, the term poker face is defined as having the ability to keep a straight face with no hint of emotional expression. In old poker terminology, poker face was the name given to the card bearing the likeness of a beardless king.

The best possible straight hand in the game, AKQJT, was given the name Broadway Straight because, ironically, this hand first appeared in a New York City poker game which took place in a club located on the street for which it was named.

To a seasoned poker player, if you are In the Nuts, you believe you hold the winning hand. This expression harks back to the Old West where the nuts and bolts were literally removed from one or more wagon wheels to force a reluctant participant to stay at the table until the game was finished.

At the conclusion of a poker game, Rabbit Hunting, is the term given to the practice of looking at the next card that could have been dealt.