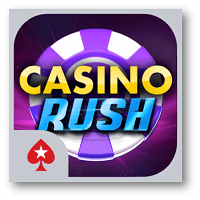 The end of the year has seen plenty of new products and innovations being introduced from every corner of the iGaming industry. Now Amaya brand PokerStars has joined the ranks too, launching its very own mobile casino app for its players.

Casino Rush brings a variety of gaming products to players’ mobile phones and tablets using Flash technology. This new app from PokerStars also offers a unique feature that sets it apart from almost all of the other casino apps currently on the market; it’s free to play.

Casino Rush has been created in response to an increased player demand for free casino entertainment that can be enjoyed on the go. Mobile casino gaming is the latest trend in the industry, and the PokerStars app is expected to be an outright success with today’s generation of tech-savvy players.

Casino Rush is Free to Install And Play On All Devices

The Casino Rush mobile app is completely free to install on all mobile devices. All of its games can be played without the need to make prior cash deposits – everything in the app is totally free to play.

Even more groundbreaking is the fact that the new PokerStars app and its casino games can be enjoyed offline. The effects of this will be far reaching, attracting players who need versatile gaming fun at any time, whether or not a data connection is available.

Lloyd Melnick, the Director of Social Gaming at PokerStars, has given his comment on the recent launch of the app. According to Melnick, PokerStars has spent much time carefully scoping out the social casino market in order to find a niche and bring players a product that they both need and want.

The director mentioned that his company has revealed that social casino players are typically looking for convenience and fun that they can partake in, even when there is no internet connection present. This fact drove the creation of Casino Rush, which now brings these players a variety of free-to-play slots and casino games in intuitive formats that can be played offline.

Players who start playing at PokerStars’ Casino Rush app will receive a starting offer of 75,000 free chips. These players can also claim extra chips and other free offers as they unlock the app’s games, which include various unique poker titles and more.

The app also offers built-in leaderboards to create a competitive environment, in which players can discover their countries’ most popular poker and casino games. These leaderboards can also be customised, giving players the chance to compete against their friends in order to top the charts as the best player in their social groups.