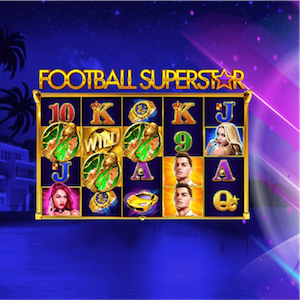 It’s almost time for the 2018 WC in Russia and flash-based slot games creator Endorphina has shown itself to be capable of keeping all of its best balls in the air! The developer has recently released a football-themed online slot game, Football SuperStar, and right in time for the biggest football event of the year.

Football SuperStar sports exciting features and design elements and the game is bound to set the hearts of football fans racing before anyone has any time to shout GOAL! It’s obvious that a lot of thought and creativity has gone into the creation of Football SuperStar, and players will be elated to be in a position to experience all of the excitement of football for themselves.

The slot features extravagant colours and symbols and is played on 5 reels, 4 rows and 50 paylines. The luxurious nature of the footballer’s lifestyle has been cleverly incorporated into the design and players are made to feel as if they finally have the opportunity to be a part of the lavish lifestyles of their football heroes.

The symbols feature elements that are very much unique to the lives of the rich and famous: expensive luxury watches, flashy sports cars, stunning women; it’s all there. Various football players, team shirts, sneakers, a referee and even a stadium, make up the rest of the collection of football-inspired slot symbols.

The Wild symbol is represented by the Football SuperStars logo and is, you guessed it, a soccer ball!

The colourful symbols are a hoot, but what really get the football action going is the special bonus features. 3 Scatter symbols on the reels will swiftly trigger a 10-free-spins bonus round and best of all, this feature can be triggered twice during the course of a game.

Another special feature, and one that promises to be very lucrative indeed, is the fact that whenever a Wild symbol drops onto the reels during a free spins bonus round, that symbol will remain in position until such time as what the bonus round has been completed. The Wild symbol will, true to tradition, substitute for any other symbol, save for the game’s Scatter (bonus) symbol.

The RTP is a whopping 96%, true to the generous nature of all things associated with the footballer’s lifestyle.