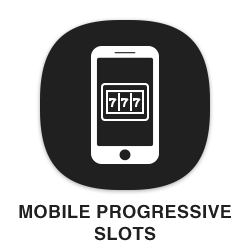 Why should you not always have the opportunity to win a life changing jackpot? Mobile casino gaming has bestowed on us various great things. There’s the sheer convenience of the whole thing – solid internet or Wi-Fi connection and you’re good to go, regardless – just don’t play and drive! Then there’s the fact that all the games you can play in a brick-and-mortar casino can be enjoyed on something as small as a smartphone. Now make no mistake, each and every mobile casino game has its appeal and unique niche but none come close in potential payouts when compared alongside mobile progressive slots. These games are simply the largest carriers of cash rewards and if a jackpot is won off a game like this, the prize can be a life-changing one.

The mobile casino movement is younger than its parent – online casino gaming. For this reason you will generally find more titles available as desktop games than you will as mobile casino games. However, thanks to the proliferation of the mobile casino movement, catch-up is on the rise as software providers make more and more of their games available to the smartphone and tablet market. The good news is that there is a very decent amount of mobile progressive slot games to play and this number is sure to increase.

How Does a Progressive Slot Work?

If you haven’t played a progressive slots game before then now is the time. It’s incredibly easy and is no different from a normal classic slots or video slots game. The only difference to be aware of is the way the jackpot works. First of all, that massive jackpot that you see that is constantly increasing is the result of a network of slot games, each one contributing a segment of its bet to one centralised pot. The pot you’ll notice often ascends into the echelons of the million dollar mark and that is precisely where you want to be. A progressive jackpot is not easy to win, in fact, it is most likely the hardest jackpot to win. Having said that, its high prize value is what keeps players coming back for more.

Winning a mobile progressive slots game requires you to either bet max to stand a better chance, to get specific set of like symbols on a certain fixed payline or to play until the jackpot feature is randomly triggered. In most cases the jackpot is a randomly triggered feature and this means its occurrence cannot be foreseen and that it can happen at any time. Quite often the progressive jackpot can involve your entry into a jackpot section, usually signified by a wheel. A prime example of this kind of setup can be found in Microgaming’s all-time favourite, Mega Moolah. In this game players get to a wheel which consists of four progressive jackpots – the mini, the minor, the major and the mega. As you’ve guessed, the mega is the one you want as it’s where the highest prize lies. Spinning the wheel reveals your prize.

The mobile progressive games that you can play are dependent on the software providers who create these games. In this segment of gaming, no software provider is created equal. Microgaming for instance is known to offer the highest jackpots whereby Betsoft offers lower tier prizes. However, there are quite a few out there, and more than enough to satisfy the market. Notable mobile progressive slot games include and are not limited to the following titles: