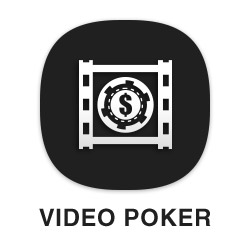 Video Poker takes the basic elements from the traditional game but has updated it to make a far more exciting one-player game. The fab thing about this fun-fuelled game is that it works perfectly on a mobile or tablet device and can be played at your own speed, as there are no other players to compete against.

The thrills of Video Poker are great for newbies as the rules are very straightforward, but even season pros never get bored of this fun game. It’s also great for all budgets as you can select a coin denomination that works for you.

To play, you’ll be dealt 5 cards and given the chance to ‘hold’ any that you think might be useful in forming a good hand. Your discarded cards will then be replaced to form your final hand. There’s always a pay table in view that you can check your hand against to see how much you can win.

Video Poker is a superb game to take on the go as it can be just as exciting in short bursts as it is when you play for hours. Check it out today at one of our top-rated Casino Apps to see what you think!

Outside of the fact that mobile video poker is easy to learn and easy to play, it’s also got loads of variations from which to choose. Like the slot game genre, video poker is able to avail itself in numerous incarnations while still adhering to the original rules and basics of the game. Slight changes here and there have given designers the ability to create all kinds of mobile video poker games while never veering too far from the formula. For the purposes of illustration, here are just some of the video poker variations you’ll be able to enjoy:

Is there a Bonus?

Always a valid question and one which always has an answer – yes – if you’re a new player or it’s your first time at the casino at which you select to play mobile video poker, there will be a bonus for you. Sign up offers can be anything from a $20 to well over one hundred pounds. The cool thing about receiving a bonus is that you’re not required to spend it all on one game. This means that you can start things off with video poker and then move on to the other exciting games at the casino such as mobile slots, mobile blackjack, mobile roulette, mobile keno, mobile scratch cards and even live dealer games.