If you are a fan of Microgaming slots, you might remember the original Break da Bank game. This money themed slot was an instant success and has subsequently spawned a sequel, aptly named Break da Bank Again.In this upgraded version of the game, Microgaming have kept the basic theme, bolstered the graphics, added a few extra bonus features and increased the size of the jackpot.

Even More Bonuses Than Before

Break da Bank Again’s setup has undergone a minor upgrade and the game now boasts 5 reels and 9 paylines. On the reels, you will find familiar images all relating to money and wealth in some way.Some of the highest paying symbols in the game include stacks of gold coins, a check with six zeros, a gemstone, gold bars and stacks of cash. The real difference between the original game and the sequel lies in the bonus features. In Break da Bank Again there are Scatter and Wild symbols, free spins and multipliers, and a massive jackpot prize!

The Wild symbol in Break da Bank Again is the game logo. This is an important symbol to watch out for as it functions like a standard Wild symbol, but is a multiplier. The Wild symbol can be used to substitute for all of the other standard reel symbols. In addition, whenever the Wild symbol is used in a winning combination, the resultant win is multiplied by a whopping 5x.

The Scatter symbol in Break da Bank Again is the vault symbol. Landing 3 or more Scatter symbols anywhere on the reels will trigger the free spin bonus round. Once triggered, you will receive up to 25 free spins, depending on how many Scatters triggered the round. The good news is that Microgaming have added even more multipliers in the free spin round. This means that any win during the free spins round is instantly multiplied by 5x, unless it contains a Wild symbol, in which case it goes up to 25x. 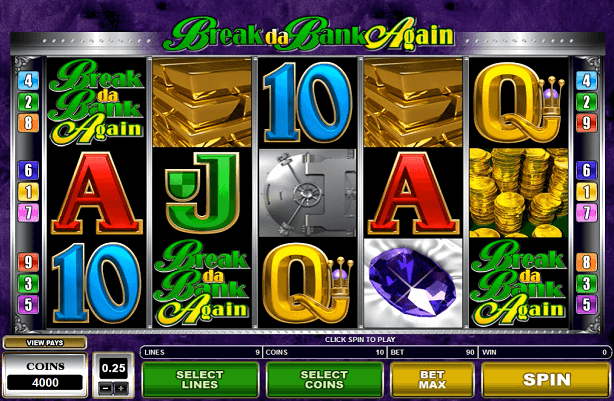