All things Christmas related will spring to life with the Deck the Halls casino app. On its 5 reels and 30 paylines you’ll see things like roast turkey, Christmas trimmings and old Saint Nick himself. This casino app’s wide availability for the mobile platform will ensure the fact that it will run with optimal performance on Android tablets, smartphones, iPhones and iPads. So in essence, if you’ve got a modern phone, you’ll always be in with a chance at winning Deck the Halls 2 400 000 coins.

Deck the Halls Video Slots, like the time of year on which it is based, aims to give as much as possible to players in order to help you reap those rewards. Helping you along your way to those festive rewards are Wilds, Stacked Symbols and Scatters. This title doesn’t have the compulsory Gamble Feature, but in its place is a Stacked Symbol, represented by Santa, and as this symbol is stacked throughout the game - in other words in both the base game and the free spin feature - it’s capable of dishing out some really big wins. Then there’s the Wild symbol represented by the Deck the Halls logo, and this one will double all wins it completes while substituting all others except for the Scatter. The Scatter symbol is represented by the Christmas bells and is your key to the free spin feature.

If you’re looking to get in on this casino app’s greatest winning feature then you’ll want to play it until you land 3 or more Scatter symbols. Once triggered, you’ll receive 10 free spins which will be aided and abetted by the Wild symbol which will become stacked and offers up a 4x Multiplier. Don’t forget about the fact that Santa is also stacked. Together these win-enhancing ingredients can come together like a good roasted turkey to deliver some of this mobile casino game’s biggest wins.

As a mobile casino app Deck the Halls has seen an improvement in terms of its sound quality. The mobile version offers a somewhat toned down soundtrack which works nicely. The game isn’t as loud as it is when you’re playing it on your PC. It has enough bonus elements to help deliver some pretty decent payouts, and because it’s got a payout ratio that sits between 95% and 96%, it’s on par with the industry standard. The nature of this game’s volatility is such that you may need to endure 200 spins or more before betting into its free spin feature. In the same breath, you might get there within the first 20 spins, and that is the beauty of slots gaming. 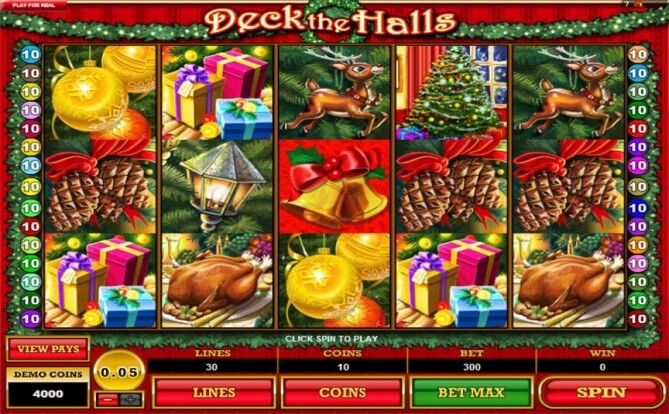