Next to the Simpsons, Family Guy is one of the longest running adult-themed animated shows around. Since 1999 the show’s been around and is in the process of going into its 15th season. There seems to be no slowing down for the show, which has been nominated numerous times. Now IGT Interactive, a prominent casino gaming software developer and manufacturer, has decided to take the show from the television box and place it smack bang in your own personal box – your smartphone that is! Family Guy Mobile Slots is quite an ambitious game, and this in essence mimics the show itself, which when it was pitched and picked up in 1999 was quite an ambitious project. Now the misadventures of the Griffin family can be yours to become a part of thanks to the Genting Casino, one of a number of mobile casino operators endorsed by us.

Genting is a Casino Classic

Before we go any further with Family Guy Mobile Slots, we’d just like to tell you a bit about the operator at which you can play it – Genting Casino. If you’re an avid casino player then the name Genting should not be an unfamiliar one. This brand has been in the land-based casino industry for years and has establishments all over England. Now the Genting brand has taken its name to the net to provide both an online (PC) and mobile casino suite for players who would rather take in the benefits of digital gambling. Genting offers users everything they could possibly imagine in all forms of legal betting and wagering. You can expect everything from slots to live dealer games right down to sports betting. Plus, there’s a deposit bonus to value of $1 000 waiting on all new and first time players.

Family Guy Mobile Slots is a very recent release from the innovative minds of IGT Interactive and takes full advantage of the technological breakthroughs of contemporary slots games. For this reason the game is loaded with bonus features and for two reasons. Firstly, IGT obviously want to impress players and fans of the show and secondly, they want to remain true to the show and in order to do this, they need to give each character his and her due. This is epitomised by the game’s 4 mystery features and its 3 bonus games. Then of course there’s the inventive way in which the game is structured to mimic its absurd and funny characters - expect lots of farting and belching. All the comedic fun plays out over 5 reels, 3 rows and 30 paylines.

There’s a lot going on this mobile slot game’s bonus features and thus we’re going to give you a cursory glance of it all. The World Bonus is kicked off when three World Bonus symbols land on reels 2, 3 and 4. Stewie, the youngest will push you to spin the earth globe to show you which feature you’ll enter into. It will come down to the Chicken Flight, a hilarious bout; Lois’ Hot Free Spins, a free spins feature models around Peter’s wife that comes with great Wild features. The third option is the Drunken Clam, a funny feature that revolves around beer and passing out!

Finally there’s the Griffin Family Mystery Feature which occurs randomly and provides four possible outcomes brought to the fore by either Peter, Stewie, Lois or Brian – the martini sipping family pet. Hilarity along with great winning possibilities will ensue – that’s for sure! If you’re looking for a modern mobile slots game that combines fun, adult humour and great bonus features, then you’ve got to give Family Guy Mobile Slots, a new IGT Interactive game, a go! 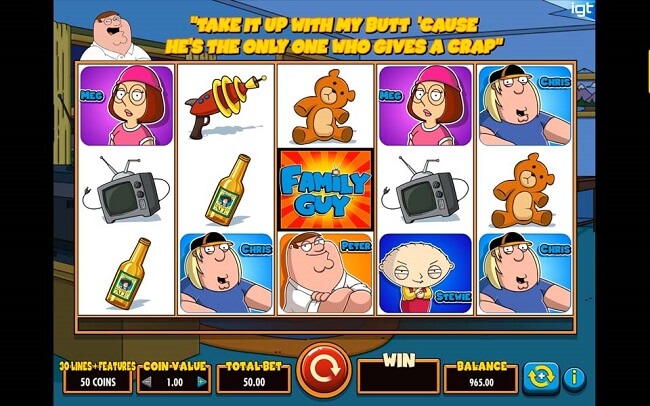