BetSoft scores highly with a new take on an old and well-established story. While loosely based on the old Mary Shelley novel and the Universal movie template of the 1930s, this game still sticks to the standard formula – monster, crazy scientist, macabre environment. It’s all pieced together quite well and, because BetSoft are quite adept at making slots games in specialised 3D animation, Frankenslot’s Monster is a casino app that looks incredibly sleek and polished. One could easily liken this game to today’s major animation features. Available to play right now at the G’Day Casino, electing to play this game will land you a sign-up bonus to the value of AU$500. Best of all, Frankenslot’s Monster is but one of the many casino app games housed at this 100% Aussie Casino.

BetSoft are pioneers in the field of 3D-styled casino games, and have thus released a string of casino apps employing amazing technology. We’re not saying that these games will outdo famous competitors like NetEnt or Microgaming, but they will offer something different. Sleek and polished, Frankenslot’s Monster sports bright colours and loads of zany characters and imagery. There’s the monster himself, pieced together from various body parts and huge in stature, but friendlier than a puppy. He’s laid out on an operating platform to the left side of the reels adorned in an old dungaree and looking somewhat perplexed. On the other side of the reels is Dr Franksenslot. Both characters can be seen jumping for joy or doing a little jiggle every time you achieve a win. It all makes Frankenslot’s Monster a fun and endearing mobile slots game, ideal as a casino app.

Not only is Frankenslot’s Monster a great game to behold, but it’s also packed with great winning and win-enabling features. The game itself operates on 5 reels, 3 rows and 20 paylines. In terms of standard images, the monster offers the highest payouts with 500 coins, followed by Dr Frankenslot with a 400 coin payout. However, the real deal symbols to be looking out for are the Wilds, the Scatters and the Bonus symbol. As is often the case, the Wild will replace all symbols while only leaving the Bonus and Scatter symbols unaffected. Five Wilds can land you a 5000 coin payout.The Bonus round is well integrated with the theme of the game – that of experimentation, chemicals and all kinds of scientific equipment. The bonus symbol itself has a series of dials that will come into play once any three of these symbols land anywhere on the reels. Once the bonus round is opened, you’ll have to adjust the settings of those dials to control the shock that you’ll send to the monster. Pull the lever, watch the sparks fly and stand to earn up to 25x your total bet.

Frankenslot’s Monster comes with quite an innovative Free Spin bonus game that can see you getting 8 spins when 3 Scatter symbols appear on the reels. But you’ll get more than just 8 spins. You’ll also get one to three random symbols turning Wild, which means that your wins could be greatly increased. Finally there’s the Double Up feature, which can be likened to a gamble feature. In this case you can flip a coin and choose heads or tails. You can bet all or 50% of your winnings on a double or nothing toss.

Why Play at the G’Day Casino

At the G’Day casino you can enjoy the Frankenslot’s Monster Casino app along with loads of other titles made by companies like NetEnt, NextGen Gaming, BetSoft and many others. You can also enjoy the casino’s live games, meaning you can wager with real dealers. Up to AU$500 is yours if it’s your first time as well as many other offers. 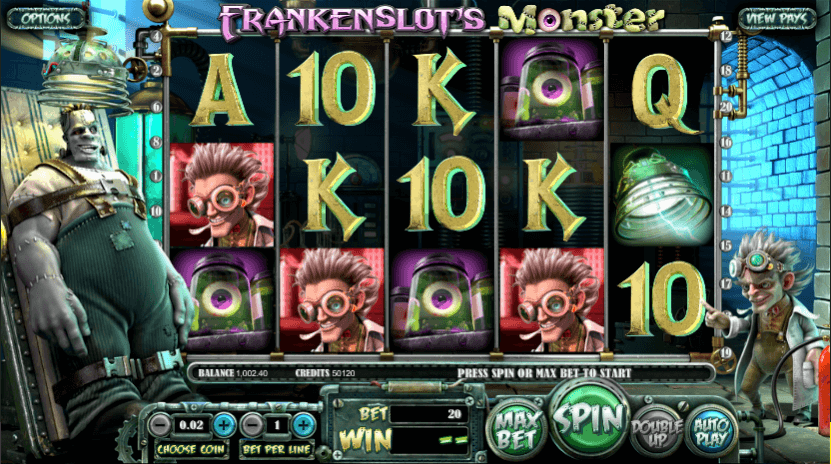