A true jockey legend who’s still going strong has just gotten his second wind in the gaming business thanks to Playtech and the Genting Casino. Frankie Dettori’s Magic Seven Mobile Slots offers up an ideal day at the tracks and one that could see you leaving with some decent cash in hand. The riding legend on which this game is based was born in 1970 and by age 13 was already an aspiring Jockey. Because the game is made by Playtech, you can expect it to come with key gaming staples, which we will expound upon further down the line in our review.  This mobile casino app is one of many to be found at the Genting Casino, an established name in the gaming industry and one that more players are flocking to.

Genting is a name synonymous with gambling - throughout the UK quite a few casinos can be found bearing this name. It’s a name of quality and reliability and one that promises to make your mobile casino experience one to remember. In order to be a competitive mobile casino, the guys and girls behind the scenes at the Genting have chosen to make gaming experience diverse and eclectic. To achieve such a feat, the services of more than one software provider have been called upon. The end result is a mobile casino that’s fuelled by at least five software suppliers, each with its own niche and each one a respected entity. With the exception of Playtech, the other software powerhouses supplying the Genting Casino with its gaming content are Evolution Gaming, IGT, Amaya and Blueprint Gaming. Genting will make your transition into its casino a smooth and appealing on with its $1,000 deposit bonus.

Playing to win with Frankie Dettori

Playtech have gifted Frankie Dettori’s Magic Seven Mobile Slots with enough features to give the game some very decent appeal. Visually the game gives one all the hallmarks of a day at the races. The star of the game, Frankie, is the Wild symbol and can replace symbols while also unveiling a big cash reward if he lands consecutive five times. The game is built upon 5 reels, 3 rows and 25 paylines. The major features of the game are comprised of a Gamble Feature, a Free Spins Bonus, a Pick-and-Reveal bonus known as the Magic Seven Bonus and a Scatter symbol. The Scatter symbol will multiply your bets while three or more will give you between 10 and 35 free spins. The bonus symbol only works on reels 1 and 5 and if it appears on both at the same time you’ll get into the Magic Seven Bonus where you can unveil multipliers and cash prizes. Finally there’s the famous Gamble Feature that avails itself each time you achieve a winning combination.

Frankie Dettori’s Magic Seven Mobile Slots is one casino app that’s not here to horse around! This game can award you 7 777 times your line bet! 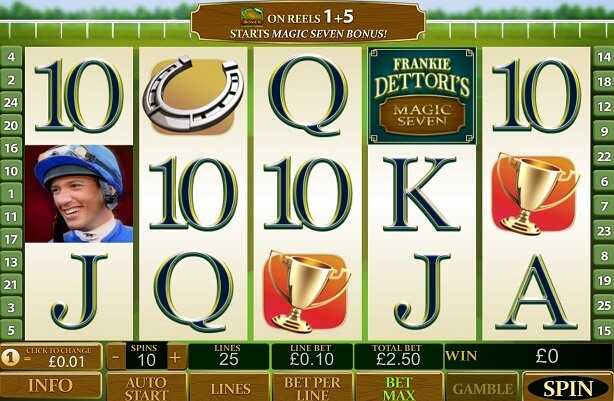