Playtech delivers the big green menace himself and wraps all his mammoth power into a mobile casino app. But don’t worry, the Incredible Hulk Mobile Slots games is still a very big game, and one that comes with multiple bonus games to fit the massive stature of this Marvel superhero. Due to Playtech’s partnership with Marvel, it’s been able to create a whole string of games from the superhero cannon with The Incredible Hulk being one of many to choose from. You can play this mobile casino app right now if you sign up with Casino.com and enjoy incredible gaming benefits, like receiving up to £/$/€300 in bonus cash after you’ve signed up. With the Incredible Hulk Mobile Slots game on your smartphone or tablet, you’re sure to have a smashing time as you and the Hulk level police cars, military helicopters and lots more in a quest to win your share of the big green.

Based on the 2008 film of the same name, The Incredible Hulk follows the same plot which sees our hero facing off against the might of the police and the army. An intro video taken straight from the film accompanies this casino app and, if this doesn’t already impress, the rest of the game with its slew of features is sure to do so. From a graphical standpoint this game looks impressive with the Hulk towering over all the action. Police squad cars, weird tubs of green goo and military helicopters account for the majority of the impressive artwork.

Like its big hero, this casino app has quite a bit going for itself. You’ve 4 power bards to help you along to additional wins as well as a Free Spins feature, a special Hulk Smash Bonus and Hulk Wilds. It’s all laid across 5 reels, 3 rows and 50 paylines. More paylines means more winning combinations.

The Hulks Wilds are applicable to reels 2, 3 and 4 and will smash and replace all other symbols, except for the Scatter and Bonus symbols. On the centre reel Hulk has the ability to expand on the whole reel while also awarding you with two re-spins. Should the Hulk Wild land on reels 2, 3 and 4, all three reels will become engulfed by him as the pulls the screen apart in an action packed sequence.

Get 3 or more Scatter symbols, represented by The Incredible Hulk logo, and you’ll be awarded with 10 Free Spins with all wins tripled! The feature can also be retriggered whereby giving you more chances to get your green.

Land the Smash Bonus symbol on reels 1 and 5 at the same time and you’ll activate the Smash Bonus in which Hulk will need to face off against a squadron of police cars and army helicopters. The onus is on you to help Hulk smash three of seven cars for cash and one out of three helicopters for a multiplier. Play this casino app today through Casino.com and get your share of £/$/€300 in bonus cash while smashing your way to the big stash. 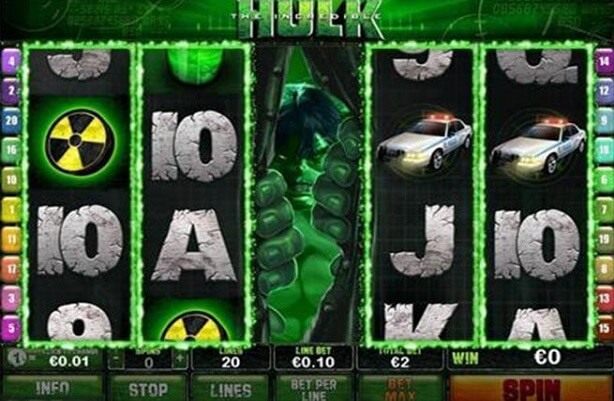