A real classic is now available as a mobile casino app thanks to the guys and girls at Microgaming. Mermaids Millions is one of the older games but despite its age has held onto a firm and solid fan base. Mermaids Millions owes a lot of its popularity to its bonus features which upon the time of its release were considered really cool and innovative, and subsequently set the pace for many games that followed after. Having said that, the game has stood up against the ravages of time and to this day still looks good. If you’re hankering for an underwater adventure that concerns Neptune, a beautiful blonde mermaid and other amusing sea-dwellers, then Mermaids Millions Mobile Video Slots is just the casino app you’ve been waiting for.

Mermaids Millions Mobile Video Slots offers its underwater adventure across 5 reels, 3 rows and 15 paylines. If you’re in search of a portable slots game that harks back to an old school format which maintains is relevance in today’s competitive gaming environment then this game will suffice. Mermaids Millions’ artwork is composed of a lovely mermaid, King Neptune, a lobster, a seahorse and your usual slots game alphabet symbols – in this case they’re encrusted well within the sea theme. Win-enhancements in this game come compliments of Wilds, Scatters and a really cool pick-and-choose bonus game.

Mermaids Millions has got quite a bit up for grabs and you’ll want to get in on those riches as soon as possible! The Wild is represented by the mighty King Neptune. Not only is he the highest paying symbol in the game – offering a payout of 7 500 coins when five appear on an active payline – but he will also replace most of the symbols to create more lucrative wins. The only symbols upon which Neptune has no effect are the Scatter and Bonus Game symbols. The Scatter symbol is represented by the game’s main character – the mermaid. Once three or more appear on the reels you’ll immediately be the lucky recipient of 10 Free Spins with each win being upped in value thanks to a 3x multiplier.

Mermaids Millions rounds off its slew of winning features with its Treasure Bonus game which gets activated  once three to five treasure chest symbols appear on an active payline. Once his happens you’ll be taken to a second screen to be faced with a bunch of sunken treasure chests, old barrels and clam shells. The amount of picks you’re entitled to is determined by the amount of triggering symbols. Each container is harbouring a unique cash amount and what’s more about this bonus game is the fact that it can also be activated in the Free Spins feature.

Play for Millions at the Hippodrome

If you’re ready to commit to a game that offers exquisite old school slots gaming that still stands the test of time, then why not do it at the Hippodrome Casino? The Hippodrome Casino is a digital extension of the popular land-based one and offers its players an excellent range of Microgaming powered titles. The Hippodrome fully supports mobile casino gaming and offers all interested parties a casino app capable of compatibility across a diverse range of smartphones and tablets. Plus, if you’re new to them, then you can get your share of up to $1 000 thanks to their exclusive deposit bonus. There’s no time like the present to start playing for fun, enjoyment and big wins. 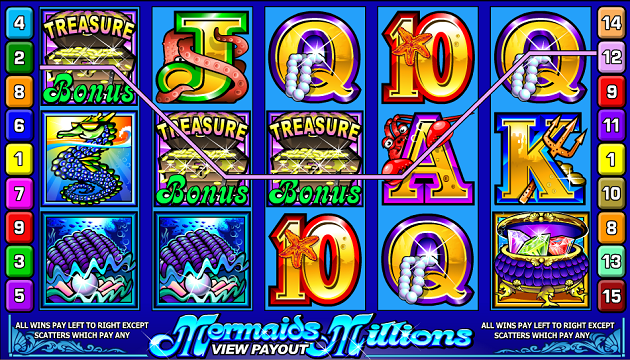