Queen of the North

Bally Wulff are the minds behind a new fantasy adventure themed mobile slots game, Queen of the North. If anyone of you are Game off Thrones fans, this game about fantasy might appeal to you. If you’ve played the Game of Thrones™ mobile casino app, then Queen of the North might be another one worth tackling. It needs to be noted that Queen of the North, while it is a very polished product in terms of its visual qualities, its nothing to write home about when it comes to extra features. In fact this game is rather bland on features and keeps things very simple. The game tries to get by on visual appeal but is thwarted in its attempt at dazzling entertainment conventions so old, they went out of gaming fashion at least five years ago.

Queen of the North has a somewhat generic feel to it, a feeling that will very soon start whispering to you “You’ve seen this before, haven’t you?” In the defense of Bally Wulff, they’re still pretty new on the scene and the internet casino scene itself is one where innovations are revealed on a platform that still operates within certain confines. Thus, if you’re going to be innovative, you need to truly get your ducks in a row.  Having said all of this, Queen of the North is still a mobile casino game and it’s one that can lead you to big wins, thus it can still do the trick.

Play it today at Slots Magic

Slots Magic is our operator of choice when it comes to Queen of the North and we’re enduring not just because it offers this one incredibly average game. No, the real truth behind our endorsement of Slots Magic has to do with the fact that it offers much better games than Queen of the North and it does so because it has wisely affiliated itself with a total of five mobile casino software providers. Real powerhouses of the software industry are all under the belt of Slots Magic and these include the likes of SkillOnNet, WMS (Williams Interactive), NextGen Gaming, Amaya and NetEnt. This casino’s promotions also make it quite an enticing digital destination for anyone seeking a mobile casino app from which they can profit from while being entertained. The welcome package, while not being the biggest we’ve ever seen, still comes in at a decent $400 and with it 200 free spins. Plus, on the whole the promotional department is on the ball with all kinds of gaming shenanigans for you be get involved in.

Playing Queen of the North

Queen of the North provides a simple gaming platform and one that will run with ease on smartphones and tablets, even older makes and models. Visually the game does somewhat entice thanks to the Queen, her sickle, her magic ring, the enchanted owl and the snow white reindeer.

The crux of the winning responsibility rests with the Queen who serves as the Wild and Scatter symbol. The Queen can serve as a 5x multiplier and replace other symbols to create stronger winning combinations while the Scatter symbol will provide you with up to 50 free spins. And there you have it. It’s not the greatest, it’s not the worst but it can unveil some sizeable cash rewards. 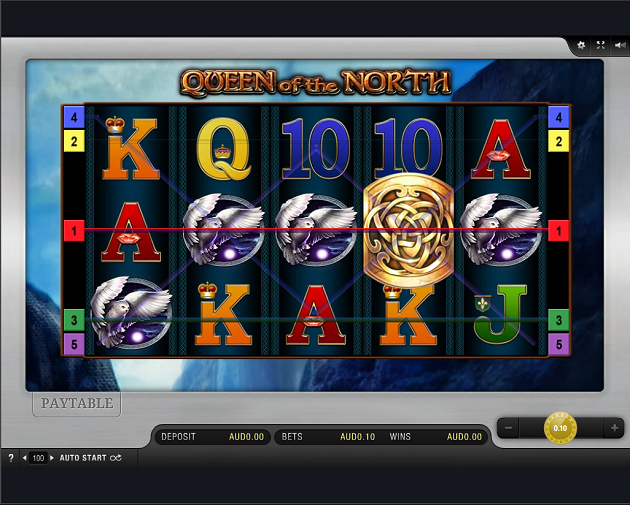