Sam on the Beach Mobile Slots

ELK Studios are behind this day at the beach themed mobile slots game that takes all the fun you can muster from a day like this and puts it all into one game. In addition to his, the game is modelled around a family of cute little trolls and all the shenanigans they get up to while taking in the sun and the waves. ELK Studios have done a very competent job with this game in that they’ve given it enough win-enhancing attributes to make it appealing, doused it in a colourful setting and given it the graphics to boot. Sam on the Beach Mobile Slots is available to play right now at Sin Spins Casino, an establishment that playfully relishes in its own decadence and invites you to give into your urge to stay, play and win.

Sam on the Beach Mobile Slots invites you to have fun with his whole family and thus you can expect to see a bunch of interesting and colourful characters all over the reels. This casino game offers quite an idyllic setting made up of a beautiful beach, palm trees and outstanding vegetation. Upon all of this rests the reels of the game which as opposed to spinning, fall into place each time you hit the spin button. Sam’s entire family is there to help improve your winning possibilities. You’ll see his brother, also known as Uncle Ted, his wife Sandra and his daughter Maggie.

ELK Studios have given Sam on the Beach 5 reels, 3 rows and 243 ways to win. The game does not have any kind of fixed payline system and instead will award wins when three like symbols appear after each other on reels 1, 2 and 3. This game’s highest payout is that of 227 520 coins and in helping you achieve this mighty amount are Wilds, Respins and Free Spins – which happens to be quite an impressive feature.

Sam on the Beach offers a Wild symbol capable of replacing all symbols, except for the Scatter bell, and capable of creating better payouts. If each member of Sam’s family lands in a horizontal line after one another, you’ll score yourself a re-spin with all members of the family turning into Sticky Wilds. This means that the Wilds remain while the rest of the reels spin. Things can stay this way for up to three spins. The Scatter bell is the big one to be looking out for and once three or more land on the reels you’ll get between 5 and 15 free spins which can be helped along by Sam and his family. 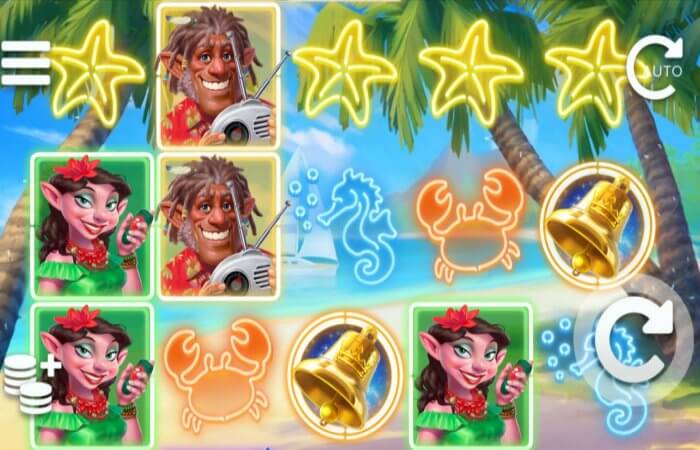