It’s the most wonderful time of the year all year round with Secret Santa! This mobile optimised slots game from Microgaming features outstanding graphics, animations and sound to bring you all the cheer you need. Like many Christmas themed slots, this game is chock full of bonus features and offers some amazing opportunities to win big!Optimised for play on iOS, Android and other popular mobile devices, Secret Santa is available in download and no download format.

Secret Santa breaks from tradition with a 5 reel slot that boasts a whopping 1024 Ways to Win. On the reels you’ll find a host of Christmas themed images, including a turkey dinner, gift-stuffed stockings, Christmas pudding, a roaring fire and Santa himself.When it comes to bonus features, this slot has a lot to offer. As well as a standard Wild and Scatter symbol, there are a total of 7 randomly triggered bonus features. 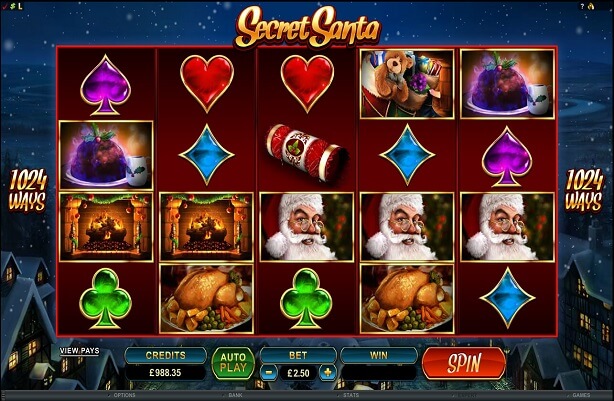