In the late 1960s there emerged a publication known as Shoot Magazine and it very quickly became the most popular and most informative magazine dealing with both English and Scottish football. Considered the most popular football magazine in the UK, Shoot started off as a weekly publication and enjoyed immense success up until the mid-1990s, after which it became a monthly publication. It eventually went weekly again and is today sold as an online publication. At the height of its fame, Shoot hit a peak of 120 000 copies per week in 1996. In 2001 it became a monthly publication and enjoyed selling 33 000 copies a month. One of Shoot’s strongest selling points was its focus on quality articles and stories, and for its hiring of First Division players to pen columns. The magazine was also known for its Hoot League Ladders. Shoot! Mobile Slots is a Microgaming powered mobile slots game that brings the magazine back in the form of its heyday in the 1970s and 1980s. If you’re ready to relive the golden age of soccer on your Android phone or iPhone, then Shoot! Mobile slots is the one for you!

Like the pages on which it was printed, Shoot! Mobile Slots will let lovers of football and readers of the old publication relive soccer’s great golden age. Featuring players like Maradona, Beckenbauer, Pele and Cryuff, Shoot! Gives you great players and matches it all up with equally enticing graphics, sounds and bonus features. If Microgaming wanted to pay homage to the magazine and the players it often spoke of, then they have certainly achieved this goal by making a game that looks great while giving off an air of nostalgia with its visual style and its four lucrative bonus features.

Shoot! Mobile Slots works very well as both a vehicle for nostalgia and one for winning possibilities. Upon 5 reels, 3 rows and 50 paylines you’ll see all the greats from the 1970s and 80s, as well as other items commonly associated with the football scene of that time such as pies, soccer balls and trading cards of all the players from that great era.

The strongest appeal of Shoot! Mobile Slots would have to be its multi-level Bonus feature that gets triggered when 3 or more Bonus symbols land anywhere upon the reels. This layered feature consists of a primary level and a secondary level which are accessible should you find special token symbols within the primary bonus level.  If you make it into the Trade ‘Em Bonus you’ll be rewarded with 4 picks from a selection of legendary Shoot! Trading cards. Your picks in this feature will either award you with special tokens or win values, and these will either land you in the Free Spin Bonus or the Magazine Bonus.

If you’re lucky enough to score your way into the Magazine Bonus feature you will be given the chance to pick magazines from past issues which contain random rewards. You’ll be able to do so until a red card is revealed. Luckily, a red card does not mean that the show is over. Instead, you’ll be taken back to the Trade ‘Em Bonus to select the remaining picks.

If you make it through to the Free Spins feature you’ll be presented with a scoreboard which you’ll need to spin in order for the amount of your free spins to be revealed. You can be rewarded with between 10 and 35 free spins with all wins boosted thanks to a 2x Multiplier.

Shoot! Mobile Slots is all about nostalgia and definitely caters to soccer fans and, in particular, fans who grew up in the golden age of football. Luckily Shoot! Carries enough bonus features and player incentives to keep both footie and slots fans playing it for quite a while. In addition to its interactive features, Shoot! Also offers mobile slots players Wilds and Scatters to help build upon winning opportunities which could be up to 15 000 coins in the base game and 10 000 coins in the bonus games. 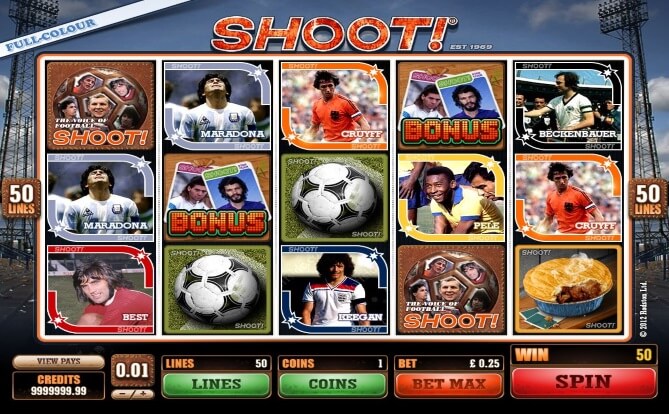