Please note, this Marvel mobile slots game has been discontinued, but there’s something else that’s just as much fun, and even more rewarding. Replacing the Marvel slots series is DC Comics, so you can still play alongside all your favourite super heroes - and super villains! Join Batman in Batman, Batman & Batgirl Bonanza, Batman & Cat Woman Cash, Batman & The Joker Jewels and Batman & The Riddler Riches, or play with Wonder Woman, Catwoman, Hellboy and The Green Lantern!

Playtech is the force powering Spider-Man: Attack of the Green Goblin Mobile Slots, and like the legacy of this Marvel property, which is rich in characters and storylines, this mobile casino app is rich in graphics, sounds and win-enhancing features. Everything you’d want in a game about the web-slinger is here: Spider-Man, Mary Jane Watson, The Daily Bugle and of course, the legendary New York City skyline. It’s all been done in classic comic style art that literally looks as if it’s been taken straight off the pages of the comic book itself.  Playtech have done such a good job of giving the web-slinger his very own mobile slots game that at times you can be forgiven for thinking that you’re not playing a casino game anymore! Great graphics and sounds help to give this casino game an exceptional air of excitement while the massive amounts of bonus games is where the real winning action lies.

The Wild symbol, clearly identifiable by the word ‘Wild’ sprawled across it, will replace all symbols except for the Bonus symbol to build more lucrative winning possibilities. Then there’s the Snapshot symbol which is randomly triggered and sees Spidey appear on screen with a camera and take a shot of certain symbols to unveil an instant prize. But by far the symbol to really be on the lookout for is the Bonus symbol, which takes you into the bonus game when it lands on reels 1, 2 and 5. Once within this feature you’ll be able to take part in one of 5 randomly selected features, each represented by a different comic book cover. There are a total of 5 exciting bonus features.

Spidey faces off against the Green Goblin in this feature that sees both characters in a stand-off. In what looks just like one of those classic arcade games, each character has a power bar.  Five cobweb bars will appear below the screen and each time you choose one it will either be a Spidey symbol that will cause the web-slinger to hit his arch nemeses or it will be a Goblin symbol which will result in a hit against Spidey. The one whose power bar is depleted first is the winner. If Spidey loses then only the cash that was awarded from each individual hit is won but if Spidery wins the prize is even bigger. If you’ve got luck on your side you can come away from this feature with 20x your bet.

This feature looks stunning and really shows Playtech at its best. This one has a chase that ensues through the city as Spidey web-slings after the Goblin. Each time they land atop a building, there is a mini bonus that takes place where you’ll need Spidey to collect prizes. Wins in this feature can land you up to 60x your bet!

In this Free Spin feature you’ll receive 20 spins along with extra Wilds. Spidey will appear and fire off his webbing at the reels for at least 3 spins. During that time any Wild symbol caught within his web will remains stuck to create more winning possibilities. If the Goblin shows up too, he will act as an extra Wild and complete all wins with a 2x Multiplier.

This feature gives you 10 Free Spins and a multiplier that starts at 1x. Should the Spidey symbol show up, it will stop the game counter whereby allowing you to get loads of additional free spins. If this symbol appears again then your multiplier will shoot up to 5x, but should the Green Goblin appear, the counter is reset as well as the multiplier.

In this feature you’ll receive 15 free spins with the possibility of a radioactive spider showing up on reel 3. When this happens it serves as a Wild while also spreading to reels 2 and 4 to create Wild wins created from all three reels.

Spider-Man: Attack of the Green Goblin Mobile Slots has a lot going on, especially in the 5 bonus games. The base game keeps things pretty simple but the real fireworks in terms of great graphics and bonus features come alive after you’ve landed Bonus symbols on reel 1, 3 and 5. The only downer is that the bonus games are randomly awarded which means it could be a while before you get back to one that you really like. 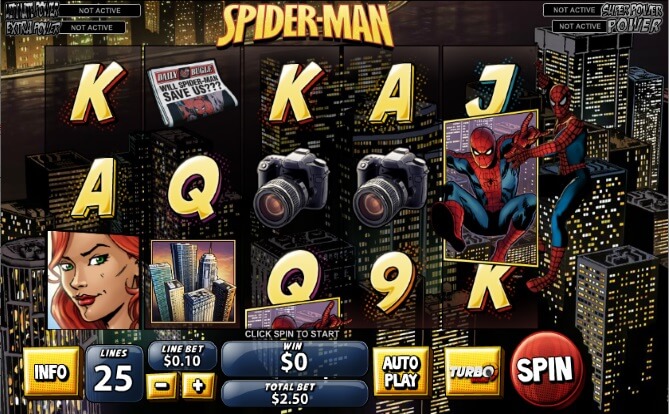