It’s simple, it glistens with dazzling imagery, it’s fun to play and it’s perfect for your smartphone and tablet – it’s Starburst Mobile Slots. This NetEnt creation might not be the most complicated or complex mobile slots game ever unveiled by the gaming giant, but it’s still a NetEnt product and this means that you can still expect quality. Starburst won’t demand lots of you in terms of commitment – the rules are super-simple – no advanced bonus games or plot lines to follow as you would were you perhaps playing something like Quickspin’s Big Bad Wolf Mobile Slots. Don’t get us wrong, we always welcome more complex games to tell you about, but the fact of the matter is that the slot machine was conceived of a simple concept and quite often, especially in this category of casino gaming, it’s nice to go back to basics.

NetEnt have gone back to school and back to basics with Starburst Mobile Slots, and in doing so have given players the chance to rediscover the joys of simple gaming. Starburst doesn’t pretend to be anything else but simple fun with a capacity to unleash some serious rewards. You might not think much of it at first, but as you settle into the game you’ll see that this game, despite its shortcomings in the bonus games department, is a winning force to be reckoned with. Thanks to the NetEnt touch – dazzling imagery and refined winning features, Starburst will be a welcomed casino app on your phone and one sure to bring in some excellent returns!

Get paid Either Way!

One of the real standout features of Starburst Mobile Slots is its two-way pay system. What this simply means is that you can achieve winning combinations from left to right and right to left. This in essence actually means that your odds of scoring a win are higher than in a regular slots game. Starburst might just have 10 fixed paylines in total but with a two-way pay system, it really won’t make a difference.

Another highlight of this mobile slots game is its brilliant use of visuals and images. NetEnt have always been renowned for the ability to produce the equivalent of poetry, but on screen. Starburst once again reveals the software provider’s talents at dazzling your eyes while giving you enough ways to profit and smile wide enough to crack a mirror. Classic and traditional images like diamonds, rubies, emeralds and precious stones sparkle with radiance while light radiates and awes the senses with each and every spin!

So you’ve got paylines that pay both ways and it’s all made better by a visual extravaganza that accompanies each spin. Then, to add fuel to the fire we’ve got the Starburst Wild, a multi-pronged star of great symmetry and colour and one that can appear on reels 2, 3 and 4. When it appears on any of these reels it will expand, become stacked and cover the entire reel to make bigger, better pays, and if that isn’t enough, it will also give you a re-spin! Why not play it right now? 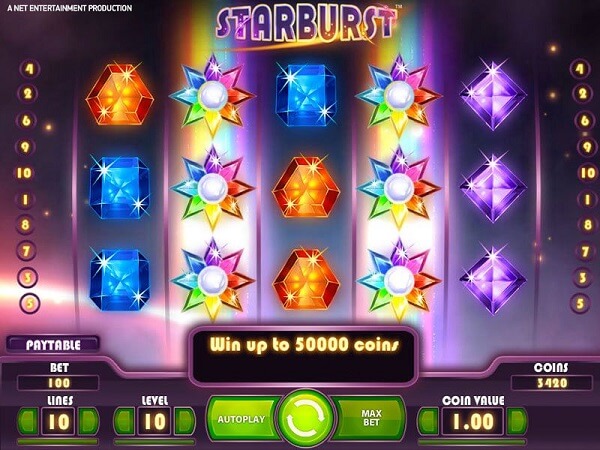