Ted Mobile Slots is to date probably the most ambitious game made by Blueprint Gaming and one that also showcases the company operating at full capacity. Ted is a 2012 comedy which stars Mark Wahlberg and also stars Seth MacFarlane as the foul-mouth title character. It’s worth nothing that MacFarlane also wrote and directed Ted along with its sequel, Ted 2.  Blueprint Gaming have devoted a lot of resources to the creation of this game and it’s most notable in the game’s bonus features.  But it’s not just the game’s bonus features, it’s also the authenticity of the character. All of Ted’s mannerisms have been perfectly realised, as if taken straight from the reel of the film itself.  Before we tell you more about this exciting mobile casino app, we figured we’d let you know where you can play it.

For our full review on the Sin Spins Casino, click here. In the meantime, we thought we’d give you a nice cursory glance of the casino and in the same breath tell you why you should play there! Sin Spins is quite unlike most mobile casinos and for one simple reason, it doesn’t pretend to be something else. Most casinos will veer away from the fact that gambling can be a devil on your shoulder, but Sin Spins does not. Instead, this mobile casino playfully taunts players and entices them to give in to their needs to play. It’s done in good taste and it’s actually quite refreshing. Spin Spins is a multi-software powered operator, meaning that your options are more varied than at many other mobile casinos, so check them out!

Ted Mobile Slots is an impressive casino game to observe and listen to and that’s because it takes all of its cues from the original movie. Ted isn’t the most moral of characters, which is why the movie is R-rated and why this casino app’s bonus features involve things like bong smoke and beer – hobbies and habits of Ted in the movie.  But it’s all in the name of fun and entertainment and it’s why the content can easily be overlooked as it is dealt with in a light-hearted manner, which is actually perfect for a game that encourages gambling.

Ted Mobile Slots plays out on 5 reels, 3 rows and 25 paylines and comes with a total of 6 possible bonus games! Each feature is randomly triggered when Ted awakes from his slumber on the couch (beers lying alongside the couch) and he will then offer up one of the following cool and amusing bonus games/features:

In addition to these features, Ted Mobile Slots also comes with a Thunder Buddies Bonus which gets triggered when three or more Thunder Buddies symbols land on the reels. You will then be directed to spin a Wheel of Fortune from which 1 of 5 free spins games are available. Each feature comes with its own slew extras. The following free spin features will be available: 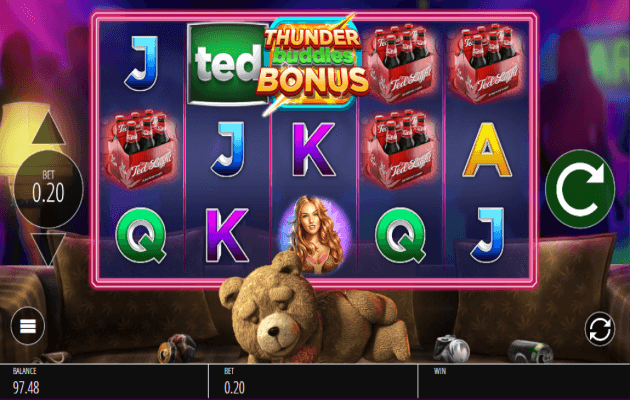