Thunderstruck II is the sequel to the massively popular slots game from Microgaming. In this upgraded version of the game, the theme of Norse mythology is expertly crafted into the fabric of the slot, and brings back Odin, Thor, Loki and Valkyrie for another exciting reel spinning adventure. In true Microgaming style, the graphics, animations and sound all work together to create a slots game that is as entertaining as it is rewarding.

Thunderstruck II has 5 reels and rather than having traditional paylines, it makes use of the 243 Ways to Win system. The reel symbols have been adorned with Norse gods, a Long Ship, Thor’s hammer, his sheep and the towering city of Asgard. The game is packed with bonus features including Wild symbols, a Wild Storm feature and the Great Hall of Spins multi-level free spins bonus round.

Wild Symbols to Boost Your Winnings

Great Hall of Spins Bonus Round

The free spins feature in Thunderstruck II is the one to watch out for! The Great Hall of Spins is a multi-level free spin bonus round that can be triggered by landing 3 or more Hammer Scatter symbols anywhere on the reels. From the first to the fourth trigger, you’ll enter the Valkyrie game and receive 10 free spins with a 5x multiplier.

Thunderstruck II Mobile Video Slots is the perfect product of tis time and its creator. Even this game is starting to rack up the years although that doesn’t show. Subsequent games are more advanced and have come out with even more features then this classic has but there is no denying the appeal of Thunderstruck. Even by today’s standards this game continues to stand the test off time and with its multi-feature Free Spins feature, its potential to unveil more and more cash rewards simply cannot be discounted. Get in on more chances to win with this classic mobile slots game today! 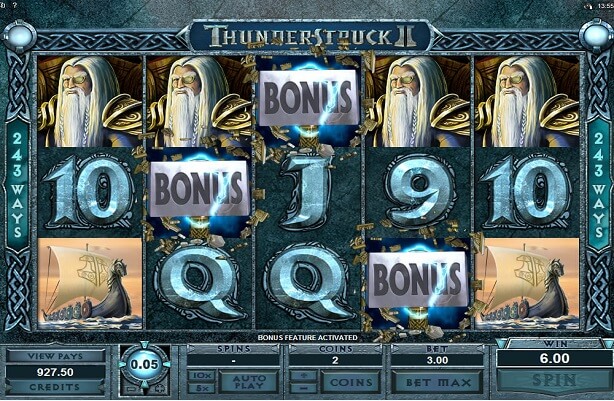