The definitive Microgaming classic, Thunderstruck Video Slots, has finally found a home on the mobile web and is now available as a casino app, ready to disperse with those same great winning features for which it’s been known for for over 10 years. The popularity of Thunderstruck cannot be overstated enough. Originally released in 2004, Thunderstruck quickly proved itself to be a solid fan favourite and has since enjoyed a profound popularity that has never waned. This relatively simple mobile slots game doesn’t have that much to offer by today’s standards and yet it is the preferred slots choice of millions around the world. Some have questioned why, citing its Free Spin feature as its biggest drawcard. Others have said that the Gamble Feature is the main reason, with some even saying that it’s 9 paylines are what really makes it appealing. The truth of the matter is that Thunderstruck is a popular casino app for all the above-mentioned reasons and more!

Thunderstruck Mobile Slots offers an almost perfect blend of entertainment and winning features. On the entertainment side of things the game has a great Norse mythology storyline concerning Thor, the god of thunder, and it’s all fleshed out across 5 reels and 9 paylines. Today’s video slot games offer a lot more paylines but seasoned players will often tell you that lesser paylines actually mean better odds. Microgaming have given Thunderstruck all the same elements for which it is so very well-known and have geared it toward as big a segment of the smartphone and tablet market as possible. Whether you’re with Apple, Android or Windows, you’ll be able to enjoy this mobile casino app.

The Thunderstruck casino app is equipped with Wild and Scatter symbols which are sure to lend their win-enhancing abilities to your gaming experience. As the Wild, Thor is gifted with the ability to give you 10 000 coins if you get 5 of him on a payline. He’ll also replace almost every symbol on the reels electing to only avoid the Scatter as it has its own winning properties. Finally, in the base game, Thor will double all wins that he completes. He’s joined by the Scatter ram symbol, a multiplier of winning combinations and the only symbol that will lead you into this casino app’s lucrative Free Spin Feature.

Entry into the Free Spin feature with its golden winning opportunities is granted once 3 or more Scatter rams appear anywhere on your screen. Once activated you’ll be given 15 free spins from which massive rewards can be obtained. All wins achieved during this feature will be tripled, and if the god of thunder makes an appearance and completes winning combination, those wins are then multiplied by 6! If you’re incredibly lucky and you manage to land 5 Scatter rams on the payline, not only will you receive another 15 free spins, but you’ll also get 500x your triggering bet!

In some ways the Gamble Feature seems to have gone the way of the dinosaur. It’s found on many Microgaming titles made within a certain era of the company’s history. But when one looks at today’s mobile video slots games, you’d be hard pressed to find a game with a gamble feature. Needless to say, Thunderstruck offers mobile casino players a great gamble feature that can be opted into each time a win is achieved in the base game. What ensues is a card guessing game that doubles or quadruples your wins. If you guess right you’ll be given the options of continuing or going back to the base game, and if you lose you will immediately return to the base game.

Old classics never die, and to date the same can be said about Thunderstruck Mobile Video Slots. The same graphics, sounds and bonus features are present in the casino app version, allowing this time-honoured classic to reach a new audience, a larger audience and its biggest fans. 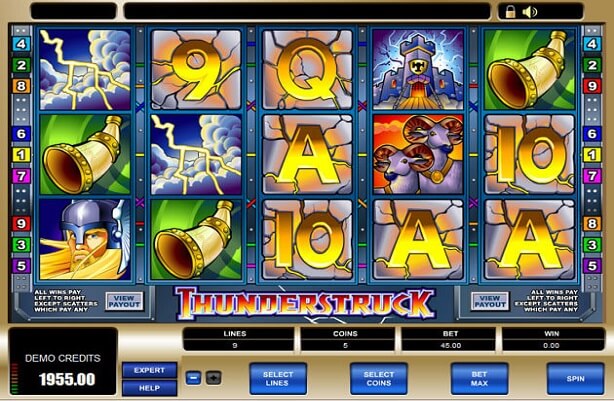