Over the years there have been slots games that have developed their own legacy. Titles that immediately spring to mind are ones like Thunderstruck, Mermaids Millions, Ladies Nite and of course, Tomb Raider. At the time of its release, Tomb Raider was a land mark event because it was the first time that such a hot console gaming property had joined forces with an online casino software company to produce a game that captured the essence of the character while also giving it over to a whole new audience. For the first time gamblers too would get a taste of what PC and console players were going nuts over. Now, years later Tomb Raider Mobile Video Slots has made its way into the constantly evolving world of smartphones and tablets, and guess what? It’s still an exceptional casino game!

Tomb Raider Mobile Video Slots has undergone a meticulous conversion process. Microgaming have realised the future of gaming and have converted this cherished title of theirs for a wide compatibility on smartphones and tablets while including all the details. So, if you have ever played this game in the past on your PC, you’ll be pleased as punch to find that Tomb Raider still comes with 5 reels, 3 rows and 15 paylines upon which you can join its heroin, Lara Craft, and hunt down all manner of relics and treasure with the help of Wilds, Scatters and Bonus games. It’s interesting to note that this game shares a similar template with many of the Microgaming titles released during the gaming era of the early 2000’s – 9 to 15 paylines, a free spins feature and either a pick-and-choose bonus game or a gamble feature. While these are staples in today’s games, they were trend setters at the time of their release and remain much-loved mobile casino gaming attributes.

Visually this mobile casino app captures all the hallmarks of the original console games so, if you’ve played any of the Tomb Raider games in the past, you’ll see the close resemblance. When it comes to win-enhancing symbols, you have the Wild and Scatter symbols that will aid you in your quest for cash. The Wild symbol is represented by the Tomb Raider Logo and if you score 5 of these on all active paylines, 7 500 coins are all yours. This symbol will also usurp the other symbols in the game to build better winning combinations. Symbols not impacted by the Wild are the Scatter and Tomb Bonus symbols. The Scatter symbol, represented by Lara Croft herself will open up the Free Spins feature when between 3 and 5 land anywhere on the reels. You’ll get up to 10 spins and with it a 3x multiplier.

Tomb Raider Mobile Video Slots rounds off its trilogy of win-enhancers with the Tomb Bonus, a very cool pick-and-choose feature that comes into play when you land between 3 and 5 Idol symbols on an active payline. The more symbols you land, the more chances to choose you’ll receive. But basically you’ll be taken to an underground lair where a whole bunch of idols will appear. The onus is then on you to choose wisely and be rewarded with cash in hand.

Play it at the Royal Panda

Tomb Raider Mobile Video Slots can be enjoyed for its element of adventure and its slew of winning possibilities at the Royal Panda Casino. One you’ve got their mobile casino app you’ll be exposed to a world of fun, thrills and winning possibilities. One of the many benefits of joining up with the Royal Panda Casino is the fact that it’s powered by more than just one software supplier. In fact, outside of Microgaming, you’ll be able to profit from mobile casino games made by NetEnt, ELK Studios, Evolution Gaming, NextGen and Thunderkick. All new players can try out their $100 deposit bonus and then become eligible for further exciting offers. 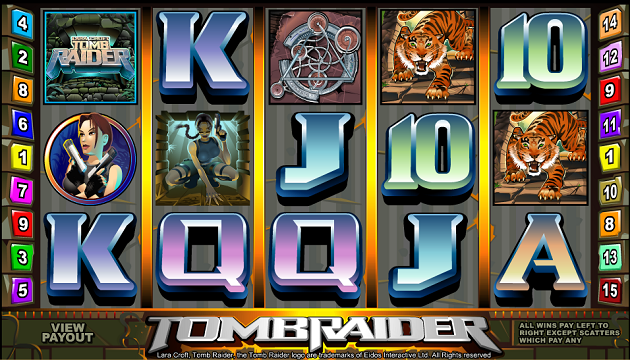